Posted by Melinda Pillsbury-Foster at 11:05 PM No comments:

Why James Dean is Worth Remembering 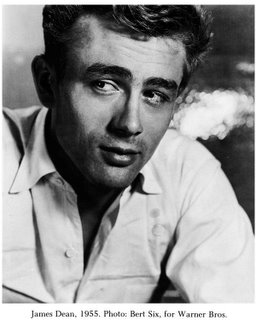 Dead Fifty Years, he still lives for those who knew him.


Earlier this month the Fresno Bee published yet another article, citing someone who postures as an authority on the life and significance of James Byron Dean; this September 30th will mark the half century anniversary of Dean's death in a automobile accident in Cholame, California. During his life time James Dean was not famous. At the moment he died only one of his three movies to have been released was East of Eden. Rebel Without A Cause was not yet in the theaters.

When he died no one had yet considered the tiny body of work Dean left behind as his legacy. No one expected him to die. James Dean's movies represent the only tangible statement of his skill. But those movies in themselves proved to be a monumental commentary. The three films illustrate ability- that plumbs depths and exhibits an intelligence unusual in an actor only 24 years of age. The roles he created in those movies expand to dominate the screen against far more experienced actors. The intelligent portion of Hollywood understood that, but as with all professions only a few could see that. Most people who are fascinated by the magnetic appeal Dean was able to project ascribe that appeal to those causes that more define themselves than they do James Dean.

"He represents eternal youth," Legnon says, leaning on the memorial. "If James Dean had lived, he wouldn't be the icon he is. He'd just be an old guy, like [Marlon] Brando or Montgomery Clift or any of the actors that Dean came of age with."

It is easy for strangers to ooze opinion about someone when that person has been six feet under for a half a century. James Byron Dean died when he was 24 years old; he died having completed only three movies but those movies burn with the intelligence James Dean brought to every facet of his life. Many young actors are the product of the need in Hollywood for fresh meat. Not so with James Dean.

Shelby Legnon, who never knew Jimmy, says that if Jimmy had lived he would have been, “just some old guy, like Brando of Montgomery Clift.” No one could be more wrong. Legnon did not know him.

But his movies speak to those who possess the wit to understand.

Jimmy was an individual who saw clearly and who had values that were defined and honed through years of thought.

If he had lived Jimmy would have transformed the entertainment industry; injecting the vibrant ideas and values that moved him originally into acting. Because that industry supplies the memes and cultural content of so much that we, as Americans, live and breathe every day of our lives, and because the world watches us as the edge of cultural change, it is fair to say that James Dean would have changed the world. That was his intention and his aim; to impact the world through the craft of acting.

He understood how it could be used. He intended to use it.

James Dean had confronted such issues and the life of the spirit, mortality, the profound differences between people, and the ideas that drive the world when he was very young. He began life as a Mama's boy, enveloped in maternal attention. He shared with his mother a world of make-believe.; they also talked about ideas. That world was shattered when his mother died and he was relocated to Indiana to live with his aunt and uncle, two people who were decent, kind, hard-working and very different. He was a sensitive child. He did not forget his mother, he continued to remember and to grieve, creating an intense internal life of ideas. Those ideas eventually took him into acting. People who are highly intelligent and creative make their own rules.

I knew James Dean; he was no hormone-driven Hollywood wind up doll. He was insightful, intellectually alive and very aware of the kind of people and motives that confronted him in the reality of Hollywood, 1955. To be successful in Hollywood you had to play the games Hollywood expected. Jimmy understood people; he understood their limitations and their prejudices. He had learned to project what was expected of him.

The Hollywood perception of James Dean is colored by the timing of when he died and by the limited access he allowed to those whose approval he needed to succeed in the career he was passionately pursuing. If he had died three years later he would have ha time to let Hollywood know who he really was; if he had died ten years later he would have changed Hollywood. But that is not what happened.

There was only one James Dean. How much of him you saw depended on how much it was safe for him to show.

Jimmy knew what Hollywood wanted him to be so that is what they saw. He was much more.

I have spent my life fascinated by ideas and James Dean was a major influence in creating that interest.

James Dean explained to me the process of photosynthesis by telling me when I was just a small child that, “Trees breathe; Live exists on Earth because the green growing things breathe in the light of the Sun and produce the oxygen that we, and all life, needs to survive.” An amazing way to make that process real and viscerally available to a child.

James Dean loved thinking about the processes of life. He loved books and the ideas that roil in the mind when that mind weaves the possibilities of what is now with what could be. He pounced on new facts with delight.

The first time I met Jimmy it was over Beanie sandwiches in the kitchen of the family home in West Los Angeles. He was a student; I was a kid. He was the kind of person who listened to children and responded thoughtfully, by which I mean he was able to connect and engage in a real discourse, not talking down to me but exploring the ideas that found their way into our conversation, introducing ideas as part of the text. With Jimmy if there was conversation there were ideas to discuss.

It was on that very first visit that Jimmy and I discussed mortality. It was the first time anyone had mentioned the subject to me. I had been watching a tortoise dissolve back into dust, so to speak. I had discovered the tortoise already very dead behind a bush in the back yard of the house. I was fascinated by the process of its dissolution as ants carried it away and it shrank into itself. I had not told anyone else because I knew how they would reaction. The tortoise would evoke shrieks and Mom would remove it.

Given a chance I hauled Jimmy back to look, too. Jimmy was delighted. He proceeded to tell me about observing the same process with a cow on a farm back home. Then, squatting down for a closer look, he told me that the essence of the tortoise, the thing that had make it move and live, was gone. The same happened to all that lived, he told me.

From that time on we talked about ideas whenever he showed up for a visit. Towards the end of the visits he had started talking to me about books he was reading and the ideas that excited him in those.

Jimmy was looking forward to a career; that career would only begin with acting. He mentioned moving on to directing and other work. He had been unhappy with the way a book he had read was made into a movie. The book was Fountainhead. He wanted to remake it because he thought the characterizations were flat and had failed to evoke the wonderful potential of the human life. I suspect now, looking back through a life time that has afforded me the opportunity to know more than I want about Objectivism, that if he had tried to do the remake he wanted Ayn Rand would have strenuously objected. Jimmy had a strong sense of spirituality that would have offended her. Jimmy would probably have ignored her objections. He was like that. He knew what he wanted and he was determined.

I have many memories of Jimmy; he always found time to talk to me and since we shared a fascination with ideas there was always lots to discuss. The essence of spirit, the past and how we know and understand it; the flow of time. All of these things were subjects we discussed. He did most of the talking, naturally. I listened carefully and asked questions.

Does a shallow, self indulgent kid greedy for fame and the potential for self importance and what fame can buy spend that kind of time with a child? No. Would that kind of discourse slip from the lips of an angst ridden pop tart? Hardly.

If Jimmy had lived he would not have become a fat, self-indulgent has been. He would have taken the capital he had created in name identification and respect and invested it in projects that pushed the edges of thought in new directions. Hollywood would have followed his lead because he was worth following. He would have started projects for kids in Fairmount, Indiana; he would have, perhaps run for office. He would have done good in all directions. He cared about people and he cared about the kind of world his generation would leave behind.

I know that to most people he exemplified the undirected angst of youth. Ironically the image he left immediately in the minds of most Americans was the product of hard work at the craft of acting. To see that perhaps Legnon should stand back and consider the intellectual vigor it takes to achieve that outcome. Jimmy was directed, focused, intent, inquiring and passionately interested in everything around him. That remains the unspoken and compelling presence that continues to fascinate, even if the viewer does not understand why.

I wish you could have known him. Then you would understand why he is worth remembering.
Posted by Melinda Pillsbury-Foster at 8:12 PM No comments: